The Spanish media have quickly moved Swansea City along from Alvaro Negredo to Adrian Lopez.

The 29 year old FC Porto forward is available for a transfer this summer, and Marca claim Swansea have him on their agenda.

Besiktas are said to be keen too, and the Turkish club were, just like Swansea, linked to Negredo themselves. However, the big difference is that Besiktas actually signed the Valencia player, and he arrived in Istanbul on Thursday evening.

Deportivo La Coruna are also keen on Lopez, but Marca believe the offers from Swansea and Besiktas would be better. Negredo isn’t mentioned, but his signing by Besiktas may edge them out of the race.

That may not make it easier for Swansea, with Marca saying Deportivo La Coruna have a good relationsip with Porto and can count that as an advanatge.

However, in reality, Porto value cold hard cash over nice relationships with other clubs, 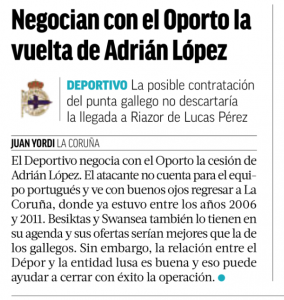 they pretty much have to because of their debt situation.

Depor have been linked to a string of forwards this summer, and continually move on to new ones.

If Swansea City interest is real, and they simply haven’t been added for drama, they’d have a good chance.