Jordan Veretout made it clear throughout his loan period with Saint-Etienne that he had no intention of returning to Aston Villa and playing in the Championship.

Not afraid to speak out and upset people, and incredibly confident in his own abilities, Veretout expected a stay at a reasonable club in France’s Ligue 1.

The problem has been finding a club that’s interested, acceptable to Veretout, and also willing and able to pay Aston Villa the transfer fee they want. So far, that’s been too difficult a combination to bring together.

Therefore, Veretout is back at Aston Villa, and played well in a recent friendly, leading some fans to voice their hope he could remain at Villa Park.

French newspaper L’Equipe report a new possible destination on Saturday, explaining that whilst Saint-Etienne remain interested in taking the player back, Real Betis have come into the picture, pushing their own interest. 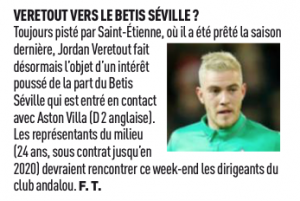 Betis were linked to Veretout last summer, but he ended up at ASSE. The player’s representatives will meet with Betis over the weekend, and a move to Spain rather than France would be something of a surprise, but an interesting opportunity for the player.

The Seville club would almost certainly prefer a loan deal, perhaps with the option of making it permanent.