Ander Herrera to PSG has reportedly been ‘done’ on multiple occasions, with someone seemingly happy to continually leak claims about offers received by the Manchester United player.

The Spaniard’s contract expires at the end of June, which puts him in a strong negotiating position. Herrera’s camp appear to have been using that advantage to its fullest, with the danger of overplaying their hand.

On April 27th, L’Equipe reported PSG’s wages offer to the player was actually €115k per week, much less than some other reports had claimed.

They stated that whilst things were progressing on a move for the Manchester United midfielder, there was still no agreement, and an offer from Athletic Club Bilbao was causing problems.

The Basque club were tempting Herrera with a higher wage and a longer contract. Interestingly, this wasn’t reported in the well connected Basque media, and Athletic have since come out and said the player won’t be joining them.

That offer may not have existed. And if it didn’t then someone was pushing around fake claims.

This week’s edition of France Football has a section on transfers for several big clubs. Much of it should be ignored, given there’s no French connection and they’re just reiterating claims from elsewhere in Europe. 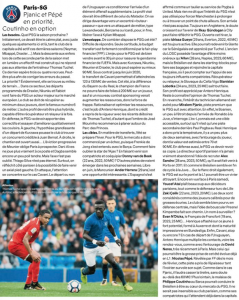 On Herrera, it would be thought they know more.

France Football state Herrera is an ‘interesting opportunity’ rather than a done deal. This time they even make it clear that the talks with PSG could be designed to pressure Manchester United into offering a better deal, or even getting more money from elsewhere.

It’s not been the most covert operation.