Stoke City have been stubborn in the transfer window this summer.

The Premier League club have shown, on several fronts, a determination not to pay what they feel is over the odds, and a resilience against selling players for a bargain fee.

That’s why Bruno Martins Indi still isn’t a Stoke City player, with the defender remaining on the exit ramp at FC Porto for now, and likely also why Giannelli Imbula remains contracted to the Premier League club.

Several clubs have made attempts for Imbula, but Stoke City have only been interested in a permanent deal, have knocked back loan attempts, and want a good fee for the midfielder.

Monaco have been linked several times recently, and Tuesday’s edition of L’Equipe reports there’s hope a deal can be done quickly. 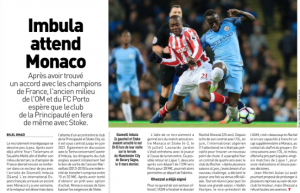 agreement with Monaco a week ago, and now waits for the clubs to agree on their terms for a transfer.

The price has been set at €15-20m, and Monaco will be looking to knock a little bit off the lower end of that ranger, whereas Stoke will push for as much as possible, especially given the income generated at ASM this summer.