On Friday, UOL Esporte stated Chelsea have reached an agreement with Leeds United to sign Raphinha and are waiting for the player’s approval to conclude the operation.

That approval has not come so far, given the winger’s priority is to join Barcelona. The La Liga side are convinced they can hijack the deal from the west London club.

AS on Friday explain ‘stars have to align’ for the Leeds star to end up at the Camp Nou. Even if it seems almost impossible, his agent, Deco, will try to do everything to take the 25-year-old to Barca.

Two factors must be fulfilled for the Brazil international to join the Catalan club. The first is that Ousmane Dembélé doesn’t continue at Barcelona, his contract expired yesterday and he is now without a club.

The second is to convince the Whites not to listen to offers from Chelsea and Arsenal, and also look favourably on Barcelona’s proposal. This would be the difficult part of the deal.

Over at Mundo Deportivo, they explain Xavi Hernández’s side haven’t given up on the former 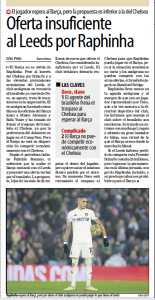 Rennes man, while his agent has ‘tried to stop’ his client’s transfer to Chelsea. Barcelona are not in a position to compete with the Blues financially.

Jesse Marsch’s side would like to respect the attacker’s wish to play for the Blaugrana, but, at the same time, want to get as much money as possible from his sale. The agent is already at work to push his client towards Barca.

Mundo state: ‘If the economic situation does not change and the Catalans cannot compete with the other offers, the Brazilian will play at Stamford Bridge.’