For the past few days, reports coming out of Spain have discussed Arsenal interest in signing Real Madrid’s Marco Asensio.

On June 29th, AS reported Mikel Arteta is a great supporter of the operation to sign the player this summer.

It was also explained the La Liga winners haven’t made any offer to renew his contract. The 26-year-old has 12 months left on his current deal at the Bernabéu.

Sport on Friday state the Spain international wants to leave Los Blancos for a team that can offer him a better salary and more playing time. His agent, Jorge Mendes, has a task to find a club that meets this criteria for the former Mallorca man.

It’s claimed the attacker is looking to earn €6-7m [likely net] per year in wages at his new club.

Carlo Ancelotti’s side are asking for a €40m fee to sanction Asensio’s sale. Arsenal and Milan are the Spaniard’s suitors and Sport state these are the two clubs ‘who love him’.

With Arsenal and Milan unwilling to meet the Champions League winners’ demands, the player expects his employer to ‘lower the price’.

Liverpool manager Jürgen Klopp likes Asensio, but he will find it hard to have significant game time at Anfield. 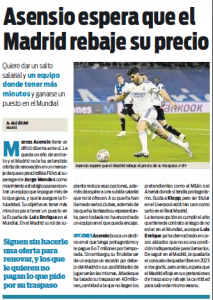 Ancelotti’s man has a ‘difficult dilemma’ in front of him, on whether to prioritise a better salary or game time, so that he can make it to Luis Enrique’s Spain squad for the Qatar World Cup.

The third option is to stay at Real Madrid for one more season and leave them as a free agent in 2023.

This involves a risk of being left of Spain’s squad for the FIFA tournament at the end of this year.