Barcelona are battling with Chelsea to sign Leeds United star Raphinha. Earlier this week, reports indicated the Blues have taken steps to secure the winger’s services.

On June 29th, journalist Gerard Romero stated Chelsea have an agreement in place with Leeds over the transfer fee, but are yet to convince the 25-year-old.

This is giving the Catalan club hope as Romero states Barca are still alive in the transfer race.

Chelsea’s agreement with Leeds for the transfer is backed up in Brazil by UOL Esporte, who state the two Premier League sides have agreed a deal of around £55-60m.

Thomas Tuchel’s side are ‘waiting for a yes’ from the ex-Rennes man to conclude the deal. That, for now, has not come, since he has asked his agent, Deco, to ‘make a last attempt’ for a deal with Xavi Hernández’s side.

Therefore, Deco made a trip to Barcelona to seek an understanding with the La Liga side. The player has a verbal agreement with the Blaugrana over a five-year deal.

Chelsea are waiting for Raphinha’s ‘yes’ to ‘confirm the purchase’, while the attacker has let his agent know to make one last effort to take him to the Camp Nou.

Although the Leeds attacker’s preference is to join Barcelona, he has given an ‘ultimatum’ to them. If it’s not possible for him to join Xavi’s side, then there is a good chance the South American could end up at Stamford Bridge this summer.

Mundo Deportivo state Deco, who is ‘tempted by Chelsea’, met with Barca’s leaders at the club’s offices yesterday, to get clarity on whether or not they can carry out the operation for his client.

Raphinha also wants clarity on whether Xavi’s side will be able to fight with the Blues for his signature. 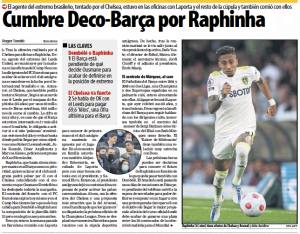 The Spanish giants are clear they only have room for him or Ousmane Dembélé. The latter’s contract expires today and it is not clear what his plans are.

The ‘next few hours are decisive’ to know the future of the Leeds man.