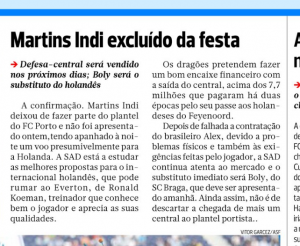 Bruno Martins Indi is reportedly leaving Porto. A Bola says the player officially isn’t part of the squad anymore, and he already departed from Portugal and flew to Holland.

The newspaper says there are a few clubs interested in the defender, but the only side mentioned in the article is Everton.

They claim Ronald Koeman knows Martins Indi well and appreciates his qualities. Porto are said to be analysing the offers, although it isn’t mentioned if the Toffees have already made an official bid or not.

Porto reportedly want to make a decent amount by selling him, which would be at least the €7.7m they paid for the defender in 2014. They’d probably be looking for some profit on that.

The rumours regarding Indi’s move to the Premier League have been published for a few months now, but perhaps the latest claims make a transfer look much likelier than at any point previously.