Stan Kroenke, his son Josh and Raul Sanllehi have a plan, report L’Equipe on Tuesday.

The idea, led by the Spaniard, would be for Arsenal to somewhat mirror the set-up at Manchester City.

Give a Spanish spine to the Gunners, which would be like the Pep Guardiola, Ferran Soriano and Txiki Begiristain set-up at City.

For that, they’d like a Spanish director of sport, and with Monchi off the table, and Dutchman Marc Overmars staying at Ajax, Andoni Zubizarreta is now likelier than he has been previously.

This would also work for Unai Emery, who like Zubi is Basque and who has a good relationship with the former Barcelona transfer chief.

L’Equipe say Zubi is ‘bored by his experience in Marseille’ and use an image which clearly backs that up. He’s ‘tempted’ to leave the French club and join Arsenal, the French newspaper explain.

He’s being worn down by ‘a club which doesn’t move in the right direction’, and has hinted to those close to him at Marseille that a parting of the ways could be on the cards. 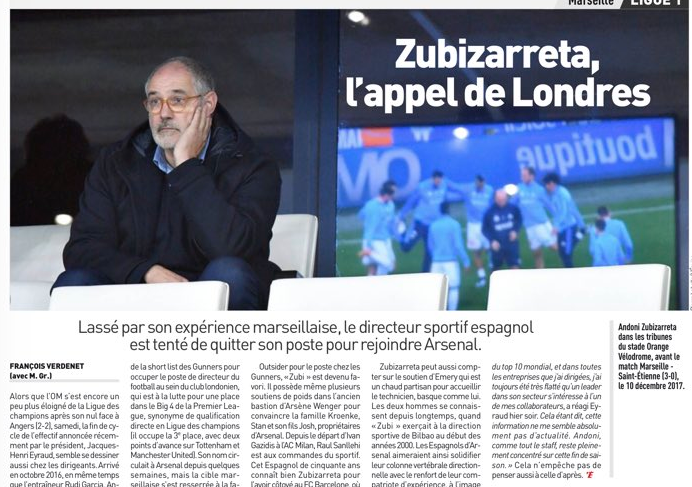 Zubi has been approached by Arsenal and is now at the front of the shortlist, following Monchi dropping out of the running. He’s gone from ‘an outsider’ to ‘a favourite’.

L’Equipe asked Marseille president Jacques-Henri Eyraud about the interest, and he said: “Arsenal is part of the world’s top 10, and in all companies I’ve managed, I’ve always been very flattered that a leader in the sector is interested in one of my collaborators. That being said, this information does not seem to me to be topical. Andoni, like all the staff, remains fully focused on the end of the season. This does not preclude thinking also of the one after.”