It’s reported Fenerbahce have been offered a number of defenders via agents and Kongolo is the latest option for the Super Lig club.

The 25 year old could leave Huddersfield this summer following the club’s relegation to the Championship, and Fotomac say Fenerbahce are considering signing him.

At the end of the season the Turkish club are likely to part ways with Martin Skrtel, when his contract expires, and they are looking to sign a defender to replace the Slovakian.

Everton’s Yerry Mina has also been linked with a move to the Istanbul club, although that option seems very unlikely indeed.

According to Fotomac, Fenerbahce are now gathering information with regards to Kongolo with the possibility of an offer being tabled to Huddersfield. 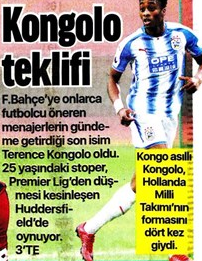 The former Feyenoord player has made 26 Premier League appearances this season and is under contract with the Terriers until June 2022.