Determined to push his way out of PSG, the defender moved to Spurs in the 2017 transfer window, after a protracted transfer effort which had lasted much of the summer.

This season, Aurier has just six starts in the Premier League and a further two as a substitute. Nine appearances have been picked up in cup competitions, including five in the Champions League, but it’s clear Mauricio Pochettino isn’t entirely convinced by the player.

There have been rumours about the 26 year old being replaced at Tottenham and there’s subsequently been links to other players, this week’s edition of France Football concentrates more on Aurier’s situation personally. 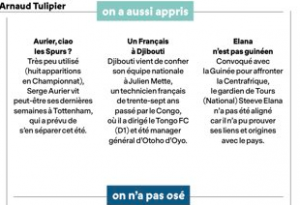 In a small but blunt update, they say the player could be experiencing his ‘last weeks’ at Spurs, and that a summer separation is being prepared.

There’s no clue as to where Aurier could end up.