Middlesbrough are one of the club’s helping the European media, and football around the world, learn the power of the Championship.

Atalanta haven’t had any luck in signing Marten de Roon on the cheap, and Nantes are just one of several clubs to have realised Middlesbrough won’t be pressured into selling Gaston Ramirez for a token fee.

It’s a novelty for some in Europe. Often, relegation to the second tier can see a club seriously struggle with their finances and have to offload players at bargain prices. The battle to balance the books means buying clubs prey on relegated sides in Europe, and snatch their best talent away.

This line of thought almost certainly led to comments from Nantes’ chairman this week, frustrated and confused by Middlesbrough’s stance over Ramirez.

“It’s very complicated. They want a lot of money for a club that’s just gone down.” #Boro #UTB https://t.co/IQV133pOBa pic.twitter.com/ZcGk8JWWny

But some in Europe are waking up to the Championship, and Marca have an article on it in their Thursday newspaper. 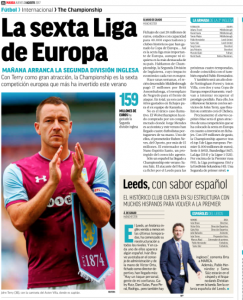 Middlesbrough’s spend this summer, put at close to €50m by the Spanish newspaper, and their ability to spend €17m (other figures are available) on Britt Assombalonga, is something that many La Liga clubs simply couldn’t emulate.

Added to the efforts at Wolves, Middlesbrough’s spending and signings like Aston Villa getting John Terry, all stack up to make Marca dub the Championship ‘Europe’s 6th most important league’.