A product of La Masia, where he spent some of his formative years between 2009 and 2011, Mamadou Sylla recently transferred to Gent in Belgium.

Spending four years of his life at Espanyol after leaving FC Barcelona, the now 23-year-old caught the eye while out on loan at Eupen, Henry Onyekuru’s former side, last season.

However, before heading to Belgium for the first time, the striker had the chance to sign for Manchester City.

Speaking to Sport/Foot in Belgium this week, the new Gent star, who signed for just over £3m, recalls the summer of 2016, when he could have easily made the switch to the Premier League, at least for a few days.

He said: “The club was ready to go far for a player who was on the bench. Espanyol would’ve got €3m. My six-year contract was ready, and all that was needed was my signature. However, I didn’t want to end up in City’s network.

“They wanted to loan me a year at Girona, in La Liga2. Basically, you don’t know if you’re going to play even a minute for Manchester City. The club can easily loan you out year after year.”

Explaining he has no regrets over his decision, even if it did cost Espanyol some money, Sylla explains money isn’t what drives him in football, hence why he also refused a move to Shanghai SIPG in China. 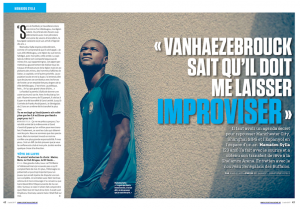 Asked if you needed to be crazy to reject a contract that would have assured financial stability for his children and grandchildren, Sylla said: “Every player makes his choices. One day, I’ll sign a contract with a lot of zeros. For a big European club. Not for one on the other side of the world.”

Who knows, if he impresses once again in Belgium, Gent could end up being the ones making a tidy profit in the summer of 2018.