Home Europe From Spain: Watford youngster hailed for his impressive start, given ‘another dimension’...
SHARE

Watford signed Luis Javier Suárez Charris from Colombian side Leones in 2017 and immediately loaned him out to Real Valladolid’s reserve team.

Last summer, he joined Gimnàstic de Tarragona on another loan before the Hornets allowed the forward to move to Real Zaragoza for this season.

Zaragoza have been in the second division since the 2013/14 season and have repeatedly failed to get back to where they want to be.

This summer, they didn’t make large investments in new signings and are 13th in the league when it comes to salary limit in LaLiga2.

Despite that, Zaragoza have started the season on a positive note and sit second in the league after four matches, two points behind leaders Cádiz.

Zaragoza have conceded only once and scored seven goals this season and three of them have been scored by the Watford owned youngster.

Today’s edition of Spanish newspaper AS hails Suárez and claims the Colombian playing alongside Raphael Dwamena (on loan from Levante) has given ‘another dimension’ to the club’s attacking division. 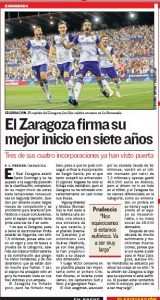 AS further states ‘after a decade of great suffering and frustrations, it seems that the sun rises again for Real Zaragoza’. However, the club’s manager Víctor Fernández has warned their supporters about the long season ahead.

If Suárez continues his good start into rest of the campaign, he could guide Zaragoza to La Liga.