Napoli signed Fabián Ruiz from Real Betis in 2018 after they triggered his €30m release clause.

The 23-year-old came through the ranks of Betis’ youth system and Barcelona had several chances to sign him, according to Mundo Deportivo journalist Miguel Rico.

In 2017, former Blaugrana general manager Pep Segura wanted to add Fabián to Barca’s B team. His idea was to sign him on a loan deal with a purchase option.

However, Betis sporting director Lorenzo Serra Ferrer was unhappy with the loan deal and offered the Spanish champions an opportunity to sign Fabián for €5-6m. Barca didn’t take that option.

Fabián impressed in the first half of the 2017/18 season and no clubs made an approach in January 2018, when his release clause was set at €15m. Betis offered him a new deal and his buyout clause was increased to €30m.

Prior to his switch to Napoli in 2018, Barcelona had another opportunity to sign the Spain international, but they let it go, although at the last minute, president Josep Maria Bartomeu wanted to ‘redirect the negotiation’

The suggestion is the Barca president was either too late, or scuppered it himself. Mundo Deportivo point out the same thing happened with Dani Ceballos.

Rico claims the La Liga winners will keep an eye on the midfielder so they can possibly make an approach next summer. The Spaniard will be under the magnifying glass, even though those at Camp Nou know him very well.

His asking price would now set at €60m or higher, which is ‘ten times more’ than what it would have cost Barcelona a few years ago. 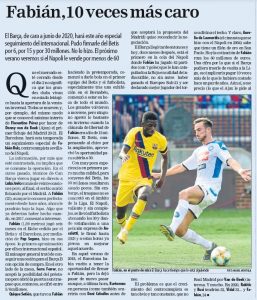 Fabián will be 24 next summer, while Barca’s Sergio Busquets and Ivan Rakitic will turn 32 and Arturo Vidal will be 33, something else pointed out by Rico.

The insinuation is clearly that Barcelona made an error here.

Kicker say Chelsea signing ‘to be finalised next week’ – Werner...