Christian Eriksen has received more than his fair share of criticism following Denmark’s disappointing 0-0 draw against Georgia at the weekend.

The Tottenham star was singled out for having a particularly poor match, and Ekstra Bladet rated him as the worst performer on the pitch for the Danish side.

It was even explained that Eriksen having such a bad day brought down the performances of his national teammates, because he’s so important to how the side plays.

Inevitably, after the criticism comes the backlash, and Simon Kjær, currently on loan at Atalanta from Sevilla, has typically stood right at the side of the Spurs man.

Quoted by the same Ekstra Bladet who were so fierce against Eriksen, the central defender said: “Of course we depend on Christian, and he lives up to that too. There is a lot which goes through his feet. He is trying to create space and it’s not for fun, he flips the defence from side to side and tries to make them tired.

“With five percent more and a little luck he also comes to chances today or some situations where he can decide the match. But such is football. Christian is only a human being. I’m not saying he played a p***-poor match, but we can’t expect him to score two goals and make two assists each time.”

Borussia Dortmund’s Thomas Delaney also had something to say about the post-match reaction, and feels there’s too much focus on the Tottenham player: “If we play well, Christian also plays well, because he is a good player. But I don’t think our game is totally 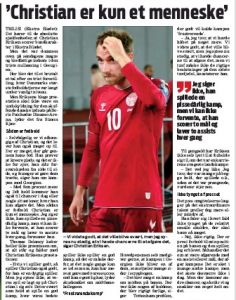 Perhaps that last bit was a little backhanded, anyway, the reaction has now calmed and Christian Eriksen is being pushed back to national hero status.