In the 2014 World Cup, it was James Rodriguez who was the star player for Colombia. That led to his transfer to Real Madrid from AS Monaco the same summer transfer window.

This time around, Rodriguez’s compatriot Juan Fernando Quintero has impressed for his national side at the 2018 World Cup in Russia. It’s not to the same extent, but it’s no surprise the attacking midfielder is attracting interest.

We carried a report from Spanish newspaper AS on June 3th, who claimed Tottenham Hotspur and Wolverhampton Wanderers ‘have contacted’ Quintero. Marca today mentions interest from the newly promoted Premier League club.

The 25-year-old joined FC Porto in 2013 and has spent the last three years on loan at Rennes, Independiente Medellín and Argentine club River Plate.

Marca claims Wolves have been the first club interested in the Colombian international this summer, and doesn’t mention Tottenham.

The Spanish newspaper say it’s now to be seen whether Wolves can reach an agreement for the player. 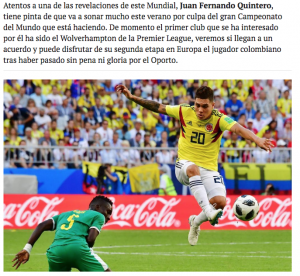 That’s two sources (AS on June 30th and Marca today) who have talked about Wolves’ interest in Porto attacking midfielder Quintero. If he manages to impress against England on Tuesday, he is likely to draw more attention, at least from their fans.

Any transfer would be complicated, with River Plate having Quintero on loan until December, given the different calendar in South American football.

“Rainy and everyone was joking” – New signing on first day at Rangers, Gerrard and when he’ll make his debut

“Rainy and everyone was joking” – New signing on first day...