Liverpool and their alleged interest in Gianluigi Donnarumma has been an on and off thing this summer, with various claims made.

Back in mid-May, we got our first whiff of something potentially brewing thanks to TuttoMercatoWeb, who stated a ‘summit’ had taken place between Jürgen Klopp and Mino Raiola.

The reason for this meeting was to discuss both Donnarumma and the future of Justin Kluivert, although the Dutch prodigy has since signed for AS Roma.

There was no fee mentioned for the Milan goalkeeper, but that changed a week or so later when Corriere dello Sport ran a story claiming Liverpool were ‘ready to offer’ €35m for the youngster, which was way below the Serie A side’s asking price.

The Italian club were said to be willing to ‘meet in the middle’ at around €55m, and that figure hasn’t really changed since, with the same newspaper stating on Monday the demand is more or less €60m. 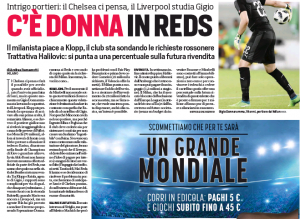 With Klopp ‘losing hope’ about getting a deal done for Alisson, he’s now left with two choices: move onto someone else or stick with Loris Karius.

Corriere explain Milan are yet to receive any ‘official offers’ for Donnarumma, but Milan know ‘something in the city of the Beatles is moving’.

Raiola, down his end, has been trying to get his prodigy a transfer for some time now, and he knows this summer is the ideal time to do it after the Italians decided to sign Pepe Reina on a free.

Selling Donnarumma would help Milan achieve two things: avoid unnecessary competition between the two players and help them with their finances, especially after their recent ban from the Europa League for the next two seasons for breaching FFP regulations.