Juan Fernando Quintero has been a bright spark for Colombia at the World Cup, which has inevitably led to transfer claims. Spanish sides and Tottenham have been linked, and Wolves seem to have been pushed in somewhere.

Saturday’s edition of Spanish newspaper AS covers the story from a Real Madrid perspective, and they say Wolves and Tottenham ‘have contacted’ the player about a possible transfer.

Madrid have contacted him too, but the deal looks like it will be complicated for any club wanting to sign him.

Quintero is currently on loan at River Plate from Porto and that deal lasts until December because of the different South American football calendar. AS say Porto don’t have a call-back option, but River have a purchase clause. 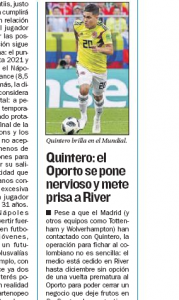 They can buy 80% of the player’s registration if they pay €3.7m, having already parted with a €500k loan fee. However, that clause must be activated by tonight. River only have until the end of June, giving them mere hours to sign the player.

If they do, then it’s just a case of Wolves, Tottenham Madrid or anyone else negotiating with the Argentine side. If they don’t, then contractually River can keep him until December, unless Porto try to buy them out of the deal.