Reports of Cedric Soares being of interest to Barcelona has caught the interest of the Portuguese media.

The rumour of a move got a full page in A Bola today, as Sporting CP could be receiving a windfall if Southampton really do sell the player.

A Bola don’t have a clue if Cedric is signing for Barcelona or not, as they only take claims from the British and the Spanish press to talk about it. But they seem to want to believe it and have therefore run with the story.

The Portuguese newspaper goes over old Barcelona interest in Cedric, from when the player was at Sporting, as if to convince themselves even further. A Bola claims that despite watching him in Lisbon a few times, the Catalan club didn’t really need a right-back by then, which is a totally different scenario from now.

However, the big Portuguese angle is how much Sporting could make from a transfer. Cedric was sold for only €6.5m in 2015, and the Portuguese side added a clause which means they would get 15% Southampton’s profits on a future transfer. 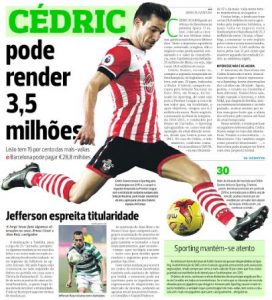 A Bola takes the amount mentioned by the press to say Barcelona could pay €28.8m for Cedric, which would mean a profit of €22.3m for Southampton. So Sporting would get a  €3.34m share of the sale.

Saying the transfer is ‘practically done’, A Bola are losing all basis with reality. As we’ve explained previously, Cedric has been one of a big number of right backs linked with Barcelona, and certainly not one of the most linked.

There’s no big clamour in the Catalan media for Barcelona to get Cedric, and it’s the British and Portuguese media who are getting the most excited.