Maarten Stekelenburg is one of a number of players who will be confused by Danny Blind’s decisions as Netherlands manager, explains a column in De Telegraaf on Friday.

Blind hasn’t exactly got the best record as Netherlands manager and his decision making is questionable.  Public proclamations of rules and ways forward often seem to only apply to certain players and Blind will change his mind repeatedly often for little reason.

This is especially true in the goalkeeper department. Everton’s Stekelenburg has seen himself as a back-up, in the squad, first choice and then completely out of the picture. He’s not the only one in this situation and the Netherlands goalkeeping situation is something of a mess.

Blind has stated on more than one occasion that players need to be representing their clubs on a regular basis to be picked for the Dutch squad, but whilst he’s applied this theory to some picks, he hasn’t to others. 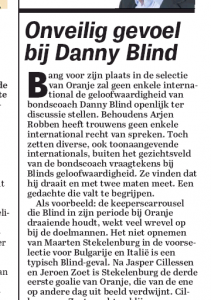 That Daley Blind, Danny’s son, has been continually picked regardless of whether he’s playing or not is of course often brought up.

Should Stekelenburg have real national team aims then an Everton exit would be the wise choice if Ronald Koeman prefers Joel Robles, or brings someone else in during the next window.

But even then, Blind’s confused thinking means very little is guaranteed.