On Saturday we covered a report from Portugal regarding Benfica interest in Demarai Gray.

The Leicester City player’s contract expires in the summer and it was stated the Lisbon club would have a hard time signing him due to interest from Southampton and elsewhere.

With finances routinely tight at Benfica, despite the amount they bring in via sales, the prospect of competing against Southampton wasn’t one to be relished.

Sunday’s edition of Record has an update on the story, and it sounds like they’ve contacted Gray’s representatives, even if they aren’t quoted directly.

Record state, according to their own information, that Gray is in ‘no hurry’ to decide on his future, and is aware of the strong position he’s in because he’s set to become a free agent. 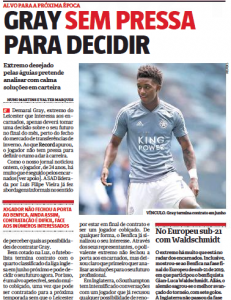 Signing a renewal with Leicester is completely ruled out, and when it comes to Southampton it’s claimed the Saints have ‘intensified talks’ with the player’s camp.

The 24-year-old has 18 minutes of Premier League action so far this season, with a further 90 minutes in the EFL Cup.