Barcelona’s Jean-Clair Todibo was a target for Watford in the last window, but the Hornets failed to seal a deal for him.

Watford maintained their interest in the defender as Sport reported last month the La Liga winners have an offer from them. Three days ago, the same newspaper explained a move to Vicarage Road has been ruled out because the English club only want a loan deal.

However, Watford’s interest in the centre-back is still discussed in Spain and ESPN’s Spanish edition reported it on Wednesday. They also mentioned Southampton, AC Milan and Bayer Leverkusen.

It was stated the Saints ‘knocked on the door’ of the Catalan club in recent days to ask about the 19-year-old.

Today’s edition of Mundo Deportivo reports Southampton and other suitors ‘go after’ Todibo.

He made his Champions League debut in Barca’s 2-1 victory over Inter on Tuesday. The defender demonstrated a high level against Inter and his price tag has now increased.

However, Mundo states his intention is to succeed at Barca, meaning he may not be receptive to the idea of move away in January. 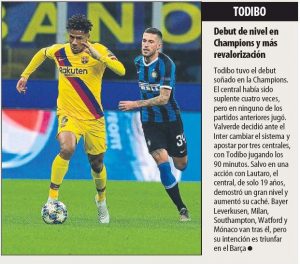 Watford have been linked since summer and they get a mention whenever a transfer report on Todibo pops up in the Spanish press.

With Mundo now joining ESPN in reporting about Southampton, there could be a genuine interest from Ralph Hasenhüttl’s side in signing the player next month.