Barcelona took Jean-Clair Todibo from Toulouse in January and the defender made two starts in the league for the Catalan club in the second half of last season.

Watford were reportedly looking to sign the centre-back in the last transfer window, but the Frenchman decided against joining the Hornets because he didn’t fancy the Premier League.

Ernesto Valverde has handed two league appearances to the teenager this season and his restricted minutes has seen him being linked with other clubs.

Watford still remain interested in the teenager as Thursday’s edition of Sport explains Barca have several offers to take Todibo on loan in January and one of them is from Quique Sánchez Flores’ side.

The Premier League club’s chances of signing the Barca defender have been hit by Bayer Leverkusen, who have been negotiating with Barca to sign Todibo for two weeks.

Barcelona are yet to agree a fee, but there is a belief an agreement with the Bundesliga side could be reached for €10m. A repurchase option would be included. 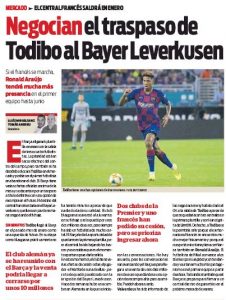 Valverde has also given his ‘Ok’ for Todibo’s transfer and Sport states he could be the first player to leave Barca in January.

Leverkusen’s interest plus their willingness to meet Barcelona’s conditions could jeopardise Watford’s chances of signing Todibo.