Currently 16th in the league, Bologna, with Filippo Inzaghi at the helm, aren’t in the best of forms, recently drawing 2-2 against bottom of the table Chievo.

To turn things around, the former prolific striker, according to Gazzetta dello Sport, wants three areas of the pitch reinforced, which includes a new striker.

A bunch of potential targets are listed, but the ‘dream’ for Inzaghi would be to bring back a certain Manolo Gabbiadini, currently at Southampton, back to the club to make it great again.

This isn’t the first time Bologna have been linked, with reports earlier this month echoing this idea, yet there has always been an issue: his wages.

However, and this is important, Gazzetta explain Mattia Destro, the club’s best paid player, wants to leave, which, in theory, could help a Gabbiadini arrival. 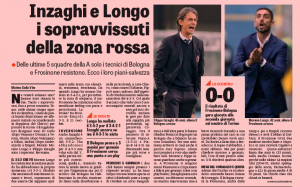 A Calciomercato article stated the Bologna forward was being paid €1.8m/year, while Gabbiadini is ‘well over €2m’ at St Mary’s.

While it doesn’t solve the issue entirely, Destro’s potential exit would leave a nice chunk of money to try and convince the Saints forward with.

Then again, the Italian newspaper state that before any transfers happen, Inzaghi needs to put points on the board, or they’ll just simply go with someone else as manager.