On June 14th, we covered claims from Het Belang van Limburg that Southampton and Wolverhampton Wanderers are ‘lurking’ to sign Zinho Vanheusden.

The centre-back spent the last 18 months on loan at Standard Liège from Inter Milan and the Jupiler Pro League want to sign him on a permanent transfer in the summer transfer window. However, they are far away from reaching an agreement.

Ralph Hasenhüttl’s side have already signed Moussa Djenepo from Standard Liège and the South Coast club had the funds to sign the defender.

However, they have ‘dropped out’ of the race for Vanheusden’s signature as they decide to chase another player who plays in the same position. 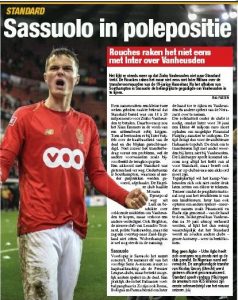 HBVL states Nuno Espirito Santo’s are ‘still in the running’ to sign the teenager, but Wolves are behind Sassuolo in the transfer race.

It is claimed the Italian side are in pole position to acquire Vanheusden’s services.