Inter Milan signed Zinho Vanheusden from Standard Liège in 2015 and after spending three years in the former’s academy, the centre-back joined the Belgian side on loan in January 2018 and the temporary deal was extended for the 2018/19 season.

Friday’s edition of Het Belang van Limburg claims the Jupiler Pro League side are interested in making the 19-year-old’s transfer permanent, while Wolverhampton Wanderers and Southampton are ‘lurking’ for his signing.

Nuno Espirito Santo’s side and the Saints will provide competition to Standard Liège in signing the Nerazzurri owned player in the summer transfer window.

The Belgium U21 international has a contract with the Serie A side until 2022 and the report explains discussions have ‘already taken place’ with the two Premier League clubs.

It is not clear if the discussions were between the clubs or between the player’s agents and the two English sides.

Wolves and Ralph Hasenhüttl’s side can afford to pay him higher wages than Standard Liège are willing to offer. 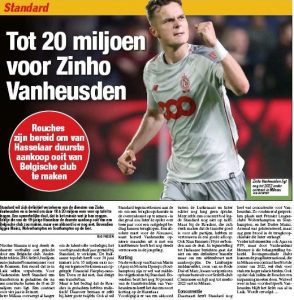 However, Standard Liège have an advantage over Wolves and Southampton in signing Vanheusden because his desire it to continue with them next season.

It remains to be seen if either Wolves or Southampton will be able to convince the player to join them in the summer.

Inter require a buyback clause, which has put Arsenal off.