Sozcu claims Galatasaray are looking to sign youngsters this summer with West Ham United’s Grady Diangana once again linked with a move to the Turkish club.

Earlier this month we covered claims from Turkey that the 21 year old is a target for the Istanbul club and Sozcu now say Galatasaray are looking to loan him, along with the likes of Silas Wamangituka and Valentine Ozarnwafor.

According to Sozcu, Diangana is seen as an alternative to Everton winger Henry Onyekuru and if the Toffees don’t loan the Nigerian back to Galatasaray then the Turkish champions will make a bid for the West Ham youngster.

Onyekuru spent last season on loan with the Super Lig and was one of the standout players during their domestic double winning campaign. The 21 year old has now returned to being an Everton player, but is currently away with the Nigeria national team. 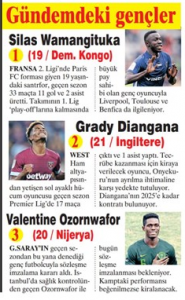 Diangana made his first team debut last season and impressed for West Ham. The young winger played 17 times in the Premier League, including 6 starts.

He is under contract with West Ham until June 2025.