Eric Garcia was a priority for Barcelona in the window just closed, but the club were unable to reach an agreement with Manchester City.

Despite the defender’s contract expiring at the end of June, the Premier League club initially asked for €30m and then reduced their demands to €20m as the deadline approached.

Marca report Barca’s last offer was €10m plus €8m in bonus payments, with €5m of the additional amount being easy to achieve. This didn’t manage to do the trick with the Spanish newspaper saying Ferran Soriano and Txiki Begiristain ‘cut short’ talks in a final telephone call.

Now eyes turn to future markets, with Marca detailing Barca’s plan. First, they’ll agree a pre-contract with Garcia in January, meaning he would arrive on a free transfer next summer.

Having secured this, Barcelona will then present Manchester City with an offer for a winter move, a low price deal which would be the alternative to seeing Garcia go for free.

However, there’s still Lionel Messi’s future to resolve. Having tried to leave the Camp Nou over the summer, an exit is still on the cards, especially if there’s no contract renewal. 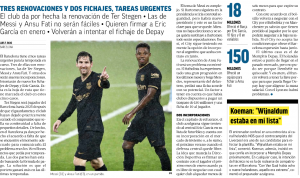 According to the report, Manchester City still have signing Messi on their agenda, and would be able to get him on a free if there’s no new deal.

Marca say a lot will depend on Barcelona’s presidential elections, and how Messi then sees his situation.