Southampton made Ibrahima Diallo their third signing of the last window as the midfielder arrived at St Mary’s from Brest.

The 21-year-old primarily operates as a defensive midfielder, but can also be used in the centre of the pitch.

According to L’Equipe, Diallo will have to fight with Oriol Romeu and James Ward-Prowse for a place in the English club’s starting XI.

The French newspaper interviewed the new Southampton signing and asked if it’s a risk moving to the Premier League at the age of 21.

“Of course, it’s a risk, like any change. But it’s a controlled risk too. I didn’t make a choice foolishly out of emotion. I’ve thought about it for a long time and whatever happens, I know I won’t regret it,” he said.

The France U21 international signed a four-year contract with the Saints and will arrive in England with 24 matches in the top flight.

Diallo initially considered continuing at Brest despite interest from the south coast club. The player details what convinced him to change his mind and join the Saints.

“Yes, to be very clear, at the beginning I wanted to stay at Brest. Because, quite simply, I’m not someone who makes decisions under the influence of emotion and it was the very end of the transfer window,” the Frenchman added.

“But I got to talk to the coach (Ralph Hasenhüttl), it was a very important thing in my choice. I had two questions I wanted answers to: why do they want me? What is the project with me?”

When further quizzed what arguments Hasenhüttl used to convince him, Diallo said: “He has very good results, he makes the youngsters play, that was very important. His speech was very clear, he knows where he wants to go.

“I liked the feeling he gave, his love for football, his drive to play attacking football. He made me feel like I wanted to move forward.” 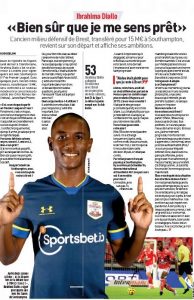 Asked if Schneiderlin’s career is a ‘model’ for him, the new Southampton signing stressed: “A model? I don’t know. You think globally and you see the big transfers that there have been in recent years.

“This is a club that does not hesitate to sell its players if they reach a huge milestone and [if] it can serve the club. We saw that with Sadio Mané (transferred to Liverpool in 2016).”