Valencia are in a mess. Last week their manager, Javi Gracia, wanted to quit the club, feeling that promises made were broken during the summer transfer window and his squad isn’t close to being as strong as he’d like.

Gracia was denied the opportunity to walk away, being told he’d have to pay Valencia compensation to do so, and therefore he’s committed to struggling on through the current season.

The Sunday Times have reported Andrea Radrizzani interest in buying the La Liga club. Owner of Leeds United, the Italian has never made any secret of his desire to build a European football empire, adding clubs from other countries.

It wasn’t so long ago that the Leeds boss attempted a takeover of Bari, only for that to be dismissed publicly by the people then in charge of the club.

Valencia would be a much bigger deal, both in terms of the size of the club and the debt which hangs off it.

Marca have taken up the claims, and they say Radrizzani has a ‘fluid relationship’ with Valencia owner Peter Lim, and that would help any deal. Despite Lim denying he plans to sell, the Spanish newspaper believe the way the club has been run recently, with players being sold off and a lack of replacements, makes it clear that not everything is right. 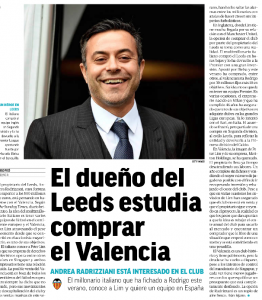 Radrizzani would be a ‘breath of fresh of air’ in much the same way he was at Leeds United, yet Marca state the possibility of a sale is ‘distant’, with the insinuation there’s not a lot happening right now.

Still, owning both Leeds and Valencia would certainly be a statement and two big building blocks on the way to that empire.