Home Europe After ‘sleeping on it’, player turned down Man United on deadline day...
SHARE

Eventually selling Romelu Lukaku to Inter after months of drama, not so subtle comments and Instagram posts, Manchester United enter the new Premier League season without a replacement for the Belgian.

Ole Gunnar Solskjaer seems happy with this (at least publicly), but that doesn’t mean the Premier League club didn’t try and bring someone in at the last minute.

Their last ditch interest in Mario Mandzukic was well documented, even when the swap deal involving Paulo Dybala was a thing of the past, and Gazzetta dello Sport bring a few details.

It’s explained the approach ‘didn’t come at the right time’, with a formal offer for the player only arriving on Wednesday evening. 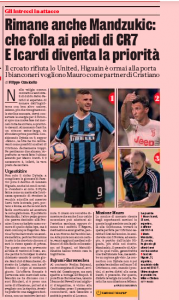 Discussing the idea of a move to Old Trafford with those close to him, Mandzukic decided to ‘sleep on it’, but eventually, come deadline day, he felt it was best to decline the opportunity of a Premier League experience.

Gazzetta explain the player would have preferred if the approach hadn’t been last minute, clearly seeing Manchester United’s interest as a desperate move rather than one they had thought out all the way through.

Mandzukic is now determined to prove his more muscular approach to the game can fit in Maurizio Sarri’s philosophy.