After Bailey Peacock-Farrell left Leeds United and completed a switch to Burnley, the Championship club decided to replace the Northern Irishman by signing Illan Meslier on a season-long loan deal from Ligue 2 side Lorient on the deadline day.

The Championship side have an option to make the transfer permanent, and he joins Kiko Casilla and Will Huffer as the three goalkeepers at Elland Road for the 2019/20 season.

The 19-year-old sat down for an interview with French newspaper L’Equipe and was asked what made the stopper leave Lorient, after spending one season with the first team.

“A new coach arrived (Christophe Pelissier) and he made a choice (made Paul Nardi the new No 1). What Lorient offered me was no longer in line with my personal goals and so I decided to leave,” Meslier said.

When Meslier was further questioned as to what convinced him to make a switch to England, he also explained Marcelo Bielsa’s presence at the club also played a role in his decision to join Leeds.

“When the Leeds leaders knew I wouldn’t be a starter, they inquired and they came to see me. After ten years in Lorient, I thought maybe it was a good opportunity to go elsewhere, for a year at least, out of my comfort zone”, he stressed.

“Obviously, [Bielsa] is a great coach. I followed what he did at Marseille a bit, and it makes me want to live [the experience], learn under his guidance, to train with him daily.”

The Frenchman, however, did stress that he will need time to adapt to the English league.

“I’m not putting too much pressure on myself, nor is the club. I’m here to discover, to grow,” the keeper explained. 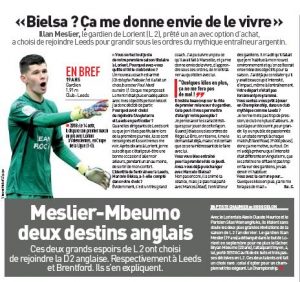 “The fans here are enthusiastic  the stadium is packed every match (Elland Road, 39000 seats), so that motivates me.

“I have already been warned that the intensity was different in England, that the referees did not blow the whistle too much for the goalkeepers. I will have to get used to it.”