In the final days of the Premier League transfer window, the Brazil international was linked with a loan move to Tottenham Hotpsur, Arsenal and Manchester United.

The window in England closed on Thursday, but the 27-year-old did not arrive at the north London club or join any other English side.

Mauricio Pochettino knows the former Liverpool man as he trained the Brazilian when the two were at Espanyol, and Friday’s edition of Sport claim the Tottenham boss called Coutinho to convince him to join the Champions League runners-up.

However, the South American turned it down because of his past connection with Liverpool. 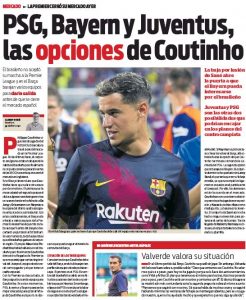 Coutinho didn’t want to play for any of the Reds’ rivals as he still has special affection towards the Anfield club.

Having rejected the option of returning to the Premier League, Sport now explain that Paris Saint-Germain, Bayern Munich and Juventus are now the options left for Coutinho.