It’s claimed Sheffield United, RB Leipzig, Manchester United and Sevilla are among the clubs who will attend the game against Rizespor on Saturday and their focus will be on the Trabzonspor players.

Cakir has been excellent for Trabzonspor since the start of the season, and his performances have reportedly caught the eye of a number of European clubs.

This week we covered claims from the Turkish media that Sheffield United had a bid rejected for Cakir in January, and they could come back for him next summer if Dean Henderson leaves the club. 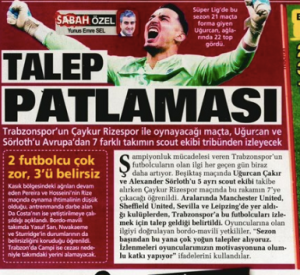 Henderson has again impressed for the Blades in this campaign but there’s a chance he could remain with his parent club Manchester United next season.

Sorloth has also been key for the Super Lig side since his loan move from Crystal Palace. He’s currently the top scorer in Turkish league with 19 goals and this has led to strong interest for him.