Home Europe “He compared me to Coutinho and Sterling” – Celtic owned player on...
SHARE

Genk signed Eboue Kouassi on loan from Celtic in the winter market and reports from Belgium explained that Brendan Rodgers’ exit from the Scottish club was the ‘beginning of end’ for the midfielder.

The Bhoys took the 22-year-old from Russian side FC Krasnodar in January 2017 and he’s now explained how the former Liverpool manager praised him at Celtic.

“He compared me to Coutinho and Sterling when they were young. That gave me a lot of confidence,” Kouassi told Het Belang van Limburg.

The Hoops owned player suffered a serious injury in a Scottish League Cup tie against Hearts in 2018 and that was his last appearance for Celtic.

Recalling that incident, Kouassi explained: “On October 28th, 2018, I still remember that day well. An opponent player landed on my right knee after I recovered the ball. My cruciate ligaments tore, a huge setback.” 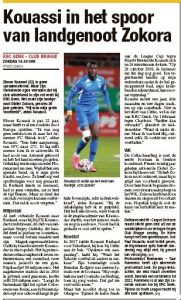 Kouassi had to wait for more than a year to get back on the pitch and that came in Genk’s 1-0 victory over Charleroi on February 1st. Since then, he has added one more appearance to his name with the Jupiler Pro League side.

On his return from injury, the African said: “[It was] faster than expected. Because I missed rhythm. But I was very happy, moved even. I felt like a football player again.”

Genk have an option to sign Eboue Kouassi on a permanent transfer.