Home Europe Several sources back up Manchester United being in talks for last minute...
SHARE

Earlier today, we covered a story from Record which said Manchester United are getting close to the amount demanded by Sporting for the transfer of Bruno Fernandes.

Now reading the rest of the Portuguese newspapers, we’ve realised they all agree on something: the Red Devils have been in talks with agent Jorge Mendes in the past 24 hours.

Starting with Record, they say the agent has been in Manchester to close the deal of João Cancelo, who’s joining Manchester City. Then he will focus on Bruno.

It’s said he was ‘called to England’ to speak both to Manchester United and to Spurs, since there had been an ‘impasse’ with both of the clubs in negotiations. 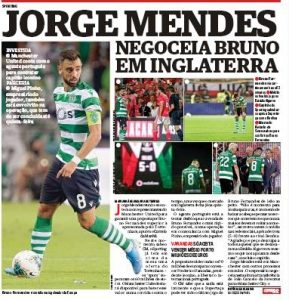 Newspaper A Bola says Mendes has been in Manchester both to talk about João Cancelo and Bruno Fernandes. He and the Sporting midfielder’s agent Miguel Pinho want to close the transfer ‘as soon as possible’.

It’s said Tottenham are offering €65m for the player, with €50m being paid now and another €15m in bonuses, but Sporting don’t really like that. Meanwhile, Manchester United offer between €75m and €80m, also with bonuses involved.

The Red Devils are not sending an official bid until they have a green light from Sporting saying they will accept the numbers.

And newspaper Correio da Manhã brings some very similar information. They also say Jorge Mendes has been meeting Manchester United yesterday, as he tries to conclude the transfer ‘as soon as possible’.

Once again it’s said the Old Trafford side are willing to beat Tottenham in the auction, but although Fernandes’ departure seems ‘imminent’, it looks like Sporting are still to receive a convincing bid from either of the sides.