Manchester United have been linked with Bruno Fernandes for months.

The Premier League club have scouted all Sporting’s matches, they’ve seen all the midfielder’s goals and they’ve seen all his assists, but they don’t appear any closer to signing him than they were a month ago… although Record talk things up today.

Tuesday is the day things are actually happening, reports the Portuguese newspaper.

After weeks of saying there’s not actually been a United offer, Record say the club are now over the €60m offered by Tottenham, but still to reach the €70m Sporting want.

They don’t explicitly say it’s been a formal offer, but it’s made clear Manchester United are now in the bidding.

The ‘next few hours are decisive’, and Jorge Mendes will be ‘fundamental’ as everyone involved tries to get this signing over the line. The difference between what is being offered and what Sporting want ‘could be overcome in the next few hours’. 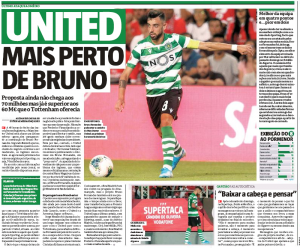 Despite all of that, optimism of a deal ‘remains subdued’, according to the claims, because there’s so little time left in the transfer window.

Tottenham aren’t out of the picture, and Spurs are still trying to sign one of Giovani Lo Celso or Bruno Fernandes.