Things could be about to heat up on the Jan Vertonghen front.

With a contract expiring at the end of June, one that will potentially be extended to the end of the season, the Belgian defender has been free to speak to other clubs for some months.

The Italian media have heavily hinted on several occasions that Vertonghen’s agents have been offering the player around Serie A clubs, and now they may have a bite.

Franco Baldini is set to return to a transfer role at AS Roma, and Corriere dello Sport report Vertonghen could be his first signing. There’s been ‘several contacts’ in recent weeks, and whilst the Italian newspaper says they can’t be sure if there’s been direct talks with the player, it’s stated that ‘for sure’ Baldini has been in contact with Spurs.

He’s asked ‘old friends’ at the club whether they have any intention of offering Vertonghen a new deal, and the response was ‘negative’, meaning Tottenham have made it known the player will be leaving when his contract expires. 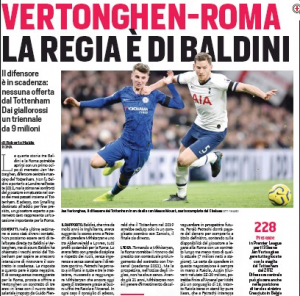 Roma are ‘ready to offer’ the Belgium international a three year contract on wages of €3m, after tax, plus bonuses.

The Tottenham man has ‘other offers’ and appears to be weighing up his options right now.