Barcelona are fishing for Philippe Coutinho interest, and the Catalan media have got their corner in that regard.

It’s been reported for some time that the Premier League is the likeliest destination for the former Liverpool player, with Bayern Munich deciding not to use the buying option they have.

Over the past week it’s been Chelsea pushed out in front as a potential destination, with it being felt that Coutinho would relish the move to London, and that Frank Lampard’s side would be able to finance a deal.

Now, claims from France and England of Arsenal interest have been grasped by Mundo Deportivo, with Barcelona wanting to welcome as many clubs as possible to the chase.

The Gunners joining the perceived pack is considered ‘good news’ for Barcelona, as they hope to get €80m, and there’s a doubt Chelsea would pay that much. 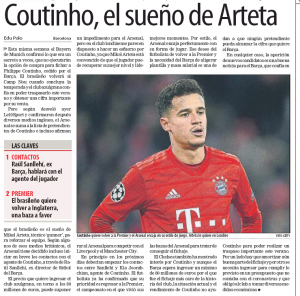 Arsenal’s Raul Sanllehí is now expected to initiate contact with agent Kia Joorabchian about the move.

All of this feels like Catalan hope for Barcelona built on not a lot, just as it’s unlikely Chelsea would pay €80m, the same goes for Arsenal.

Clubs will potentially be looking for a loan deal first, with a purchase option for next year.