Home Europe Agent trying to push player to Manchester City – So he can...
SHARE

The Nelson Semedo to Manchester City rumour is increasingly tangled.

A couple of days ago, the Catalan media reported the Barcelona player was closing in on a move to the Etihad, with that being his preferred destination this summer.

Then on Sunday, Marca rubbished all of that, explaining Jorge Mendes, Semedo’s agent, had been offering the player to City but not much had actually happened.

Monday’s edition of Mundo Deportivo mentions the situation in an article on Ousmane Dembele. They state it’s Mendes who is trying to push Semedo to a Manchester City transfer, because he would then be able to do a second piece of business with Joao Cancelo, who he also represents.

That makes some sense, and would back up our hunch from Sunday that Semedo wants the move, Mendes wants the move, Barca agree, but Manchester City haven’t yet taken the transfer bait. 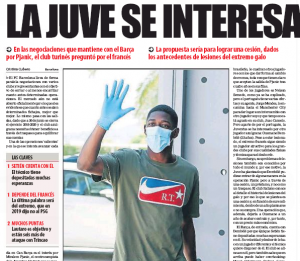 There’s still time for them to do so, however, Barca will look to include Semedo in other business, potentially with Juventus, should City not bend to Mendes’ will.