Home Europe Sending player back to Everton is part of club’s plan to save...
SHARE

Newspaper O Jogo is the one saying the Lions are letting a couple of loanees go so they can save some money before the end of the season.

It’s claimed that the club were spending €4m per year with the salaries of Bolasie and Jesé Rodriguez, and should now save €1m by sending them back to their clubs.

O Jogo says this has been planned for a while now, since Bolasie and Rodriguez weren’t included in the agreement to cut part of the squad’s salaries during the Coronavirus break. 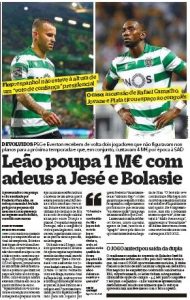 Outlet Record managed to speak to Bolasie’s agent, Jwtiar Khalid Rahman, who said he will speak to sporting director Hugo Viana ‘at the right time’. So he doesn’t confirm the player’s departure for now.

The outlet says the decision to cut short the loan spells was supported by manager Ruben Amorin, who has no intention of using either of the players before the end of the season.

Bolasie returns to Everton after 25 appearances for Sporting, having two goals and five assists. The Lions had an option to buy him for €4.5m.