It seems that Carlo Ancelotti is all the rage these days.

Linked with the Croatia national team job, as well as wanted by Arsenal and Italy, the former Bayern Munich manager is also a target for Chelsea, a club he already managed between 2009 and 2011.

Enjoying a decent spell at Stamford Bridge, it seems that Roman Abramovich somewhat regrets his decision to sack him six years ago, as the Italian press seem adamant the Russian oligarch wants him to take over once Antonio Conte leaves at the end of the season.

In fact, Il Messaggero on Wednesday claim Chelsea’s owner has already had a phone call with the 58-year-old about the job, although the details of said conversations have not been made public. 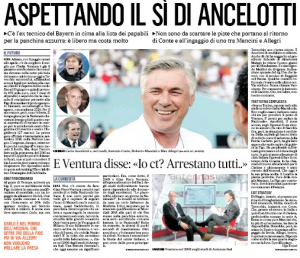 Throughout the Italian press, there seems to be a call for Ancelotti to become the new Italy manager after the World Cup regulars failed to qualify for the competition for the first time in 60 years on Monday, but the desire to remain at club level is a problem for them.

Furthermore, with London being his favourite place to work in, the lure of managing Chelsea or Arsenal will be greater than having the expectations of a whole country on his shoulders.