Exactly a week ago Sport Witness covered an article from Dutch newspaper De Telegraaf, which explained Mitchell Dijks could be on his way from Ajax to Birmingham City.

The Eredivisie giants had agreed a €3m deal with Birmingham for a permanent transfer, and all that was left to sort out were personal terms. Given that Norwich City, who had Dijks on loan from Ajax last season, had also failed on personal terms, the task wasn’t so easy.

Monday’s edition of De Telegraaf throws everything on its head. Birmingham City aren’t mentioned once in what is a lengthy article on Dijks, indeed no other club than Ajax are.

The situation has had a ‘remarkable’ turnaround, and now Dijks looks likelier to stay at Ajax. The Dutch club haven’t had much luck finding a replacement, and Dijks himself doesn’t exactly seem to be rushing towards Birmingham. 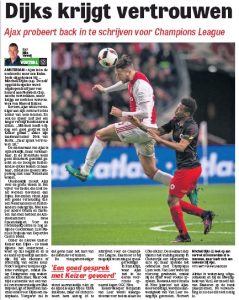 The 24 year old left back will be second choice in his position at Ajax next season, but has a reasonable chance of games.

De Telegraaf explain that should first choice Nick Viergever get injured, then Dijks is in, and if a central defender is injured, Viergever takes their place and Dijks is once again in.

As for Birmingham, the track looks closed.