Home Championship Club are willing to let player join Birmingham City, may not be...
SHARE

Mitchell Dijks has had an interesting few months.

Moving to Norwich City on loan during the winter transfer window, Dijks quickly made an impression, scoring against Wigan Athletic.

After the goal, Dijks took to social media to make comments about feeling a manager’s confidence, and how it can help, and it was immediately taken as a ‘sneer’ to Ajax boss Peter Bosz.

Bosz moved to Borussia Dortmund, so Dijks could have continued at the Dutch club after his Norwich loan, but it quickly became clear that was unlikely. In June, Norwich revealed they couldn’t agree terms with the player for a permanent move, and Birmingham City were subsequently linked in the Netherlands.

Still with Ajax, Dijks has been allowed to skip the club’s Austria preseason tour, to sort a 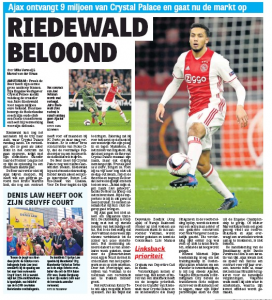 transfer out. Dutch newspaper De Telegraaf say a €3m fee has been agreed with Birmingham but, once again, Dijks himself hasn’t agreed terms.

It could be more about league than money, with Dijks saying about Norwich in June: “If we had got to the Premier League, I was definitely still there.”

That could be a problem for Harry Redknapp.