And today we have yet another claimed Everton asking price coming from France.

On January 10th, L’Equipe said Everton were being ‘greedy’ and asking €45m.

On January 11th, Le Parisien also called the Toffees ‘greedy’, but said they were asking for €40m.

On January 14th, L’Equipe said the ‘specific amount’ Everton wanted was €30m, but that internally the English club had agreed on €20m as the player’s value and were just trying use the ‘PSG effect’ to their advantage’.

We can appreciate that different sources will be told different things, but this is now beyond silly.

The only way it makes any sense is Everton playing a game and throwing a different price at PSG each day. Whilst that would be entertaining, and we’d like it to be true, it’s very unlikely to be the case.

Le Parisien report Pini Zahavi continues to be in the middle of things, and it’s pointed out he has a relationship with Everton owner Farhad Moshiri, with the suggestion being that could be a way to help the deal through. 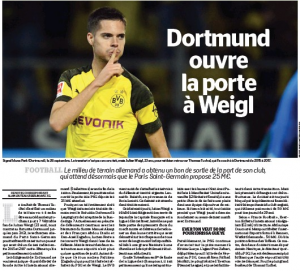 The Premier League club’s renewed interest in Abdoulaye Doucouré is suggested as the reason behind a €50m price… because that’s what Watford want for their player.

Julian Weigl is seen as an increasingly possible alternative for PSG, with Le Parisien believing he can be signed from Borussia Dortmund for around €25m.