Friday’s edition of Tuttosport shouts loud and proud that Aaron Ramsey has signed up to join Juventus.

The transfer is considered as done for the summer, and the signed contract will deposited from February, with an announcement pending for some time after that.

According to the Turin newspaper, despite everyone knowing the deal is agreed, Juventus want to show some respect to Arsenal by not announcing the move yet.

It’s explained this is similar to what happened with Emre Can and Liverpool last year, with the Gunners still having important games ahead and potentially counting on Ramsey for those.

But the Ramsey and Can situations are very different. Liverpool were pushing for a renewal with the German, whereas Arsenal have told the Welshman any offer made has been withdrawn. 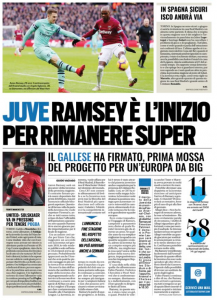 Had Juve announced the Can deal then it’s possible he would have been ostracised at Anfield, that isn’t going to happen with Ramsey.

Regardless, there’s still some hope of a January move, say Tuttosport, despite the Italian club denying that.

Arsenal are asking for €20m, and it also depends on the Premier League club bringing someone in, so they can do one in/one out.