On Monday, we covered an article in Gazzetta dello Sport stating that AC Milan are in talks with Jack Wilshere over a potential summer move.

The Arsenal midfielder is out of contract at the end of the current campaign, and Arsène Wenger knows this is probably the last season he’ll have the 26-year-old in his squad.

Allegedly unhappy at having to take a pay cut, an adventure abroad, if he doesn’t sign for Everton (who are said to be offering him a great signing on fee) could be on the cards.

According to Corriere dello Sport, the reason behind AC Milan’s interest in Wilshere is his performances over the two legs of the knockout round of the Europa League. 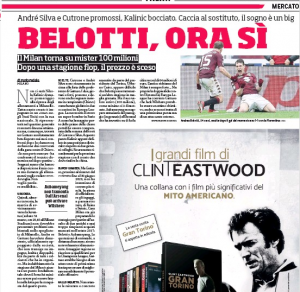 The Italian newspaper state the midfielder impressed Gennaro Gattuso so much that he convinced him he could play a role in his current side.

The former defensive midfielder has turned things round drastically at San Siro over the past few months, propelling Milan up the Serie A table into a fight for a European spot, something that looked nigh on impossible under Vincenzo Montella.

Until Jack Wilshere actually agrees a contract elsewhere, this is likely going to be a recurring story, so strap yourselves in, Arsenal fans.