The 25-year-old left KV Oostende as a free agent and joined Rangers, signing a four-year deal with them. He had opportunities to earn more money elsewhere but found the option to arrive at Rangers perfect for his career., where he now plays under Giovanni van Bronckhorst.

“However, it was not an easy choice [to join Rangers]. I had scored 16 times for Oostende, but was [available] on free transfer,” Sakala told Het Nieuwsblad.

“That is why all the top four clubs in Belgium enquired about me. I talked to their coaches and sports directors, but I wanted to go abroad. Then came the Al-Fateh, where I could earn a lot, but money was not the most important thing.

“Rangers’ proposal was perfect. I’d rather play for trophies than be somewhere halfway through the ranking. That’s why I chose Rangers over French sub-toppers.” 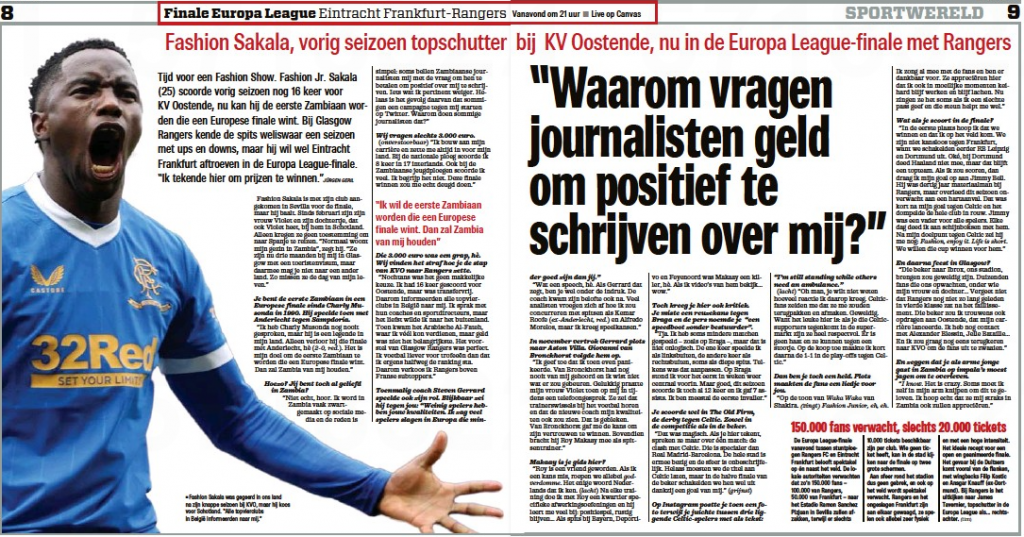 “What a speech, huh, when Gerrard says that you’ll be impressed. The coach also kept his promise. Many analysts wondered how I would compete with strikers like Kemar Roofe and Alfredo Morelos, but I got playing opportunities.”

Gerrard left the Scottish Premiership club for Aston Villa in November 2021 and Rangers replaced him with Van Bronckhorst the same month. The Zambia international didn’t take this well initially.

“I admit I panicked for a while. Van Bronckhorst had never heard of me, and I didn’t know what would happen,” Sakala added.

“Fortunately, my wife Violet then caught up with me on a phone call. She said coaching changes are part of football and that the new coach would also see my qualities. That has turned out [well]. Van Bronckhorst gave me the chance to gain his trust. In addition, he brought Roy Makaay along as a striker trainer.”

Sakala has 12 goals and seven assists to his name in all competitions this season and he is preparing for the Europa League final against Eintracht Frankfurt later on Wednesday.

Het Nieuwsblad informed the attacker he is the first Zambian to play in the European final since Charly Musonda featured for Anderlecht in 1990.

Regarding this feat, Sakala said: “I have never spoken to Charly Musonda, but he is a legend in my country. Only he lost that final with Anderlecht. My goal is to become the first Zambian to win a European final. Then Zambia will love me.”

When asked if he is not loved in his own country, the player gave an insight into how he is treated by a section of people in Zambia.

“Not really [loved in Zambia]. I am often vilified on social media in Zambia and the reason is simple: sometimes Zambian journalists call me and ask me to pay them to write positively about me. Something I categorically refuse,” the Rangers player stressed.

“Unfortunately, the result is that some start a campaign against me on Twitter. Why do some journalists do that?”

The newspaper then pressed Sakala over do if he manages to score for Rangers in the Europa League final.

“First of all, I hope we win and that I get on the field. We are not without chance against Frankfurt, because we eliminated RB Leipzig and Borussia Dortmund before. Okay, at Dortmund, Haaland did not participate, but that remains a top team. If I were to score, I would dedicate my goal to Jimmy Bell, the kit man,” he added.

“Jimmy Bell has been a Rangers kit man for thirty years but died unexpectedly this season of a heart attack. That was shortly after my goal against Celtic and it left the whole club in mourning. Jimmy was a father to all players.

“After my goal against Celtic he said to me: ‘Fashion, enjoy it. Life is short’. We want to win that cup for him.”

“At this rate they’ll put urinals in the Cathedral.”https://t.co/OYz673nMyl #rangersfc pic.twitter.com/0eIz2IU9Cq