Newcastle United remain interested in Eintracht Frankfurt star Evan Ndicka, with him likely to leave this year, in the final year of his contract.

Ndicka is one of the stars of the current Eintracht team, which has impressed this season, reaching the Europa League final, where they will take on Rangers.

Several of the players in their side have been attracting interest as a result, and SportBILD cover their futures as part of a larger piece today.

One of those who has been heavily linked with a move away is 22-year-old Ndicka, with Newcastle brought into the picture last month. 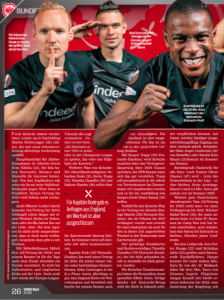 That report explained that Frankfurt want to sell the defender as he is set to enter the final year of his deal, and Newcastle were looking to take advantage of that.

SportBILD now back that up, stating that Ndicka is the ‘main candidate’ for a move this summer and Newcastle, Monaco and Marseille have ‘all expressed an interest’ in him.

Eddie Howe’s side are seemingly the most keen, with them even sending a scout to Frankfurt to watch the defender in their Europa League semi-final second leg clash against West Ham at the beginning of this month.

Whether they make a move remains to be seen, but the interest is certainly there from St James Park.